How might your company embrace sustainability as behavior while also meeting consumer needs and expectations?

We recently were lucky enough to hear first hand from one of our favorite examples of a company doing this, and doing it well: Allbirds. Tim Brown, the co-founder of Allbirds, is a University of Cincinnati DAAP grad. He’d recently come back to Cincinnati as a visiting professor, so we peeked into a recent public lecture as he shared his story, from AllBirds origin to the recent launch of their retail experiences.

“We started with the premise people don’t buy sustainable products, they buy great ones. We came to understand a product can’t be great unless it is also sustainable.” – Tim Ullman

Here are a few of our top takeaways from the hour lecture:

An entrepreneur’s path is never a straight line. Tim shared how difficult design school was, especially starting out as a student-athlete (he was a UC soccer player), from a foreign country (New Zealand), a year behind the rest of his class. He worked hard and graduated from design school – but didn’t go straight into business. He played pro-soccer, going to the world cup, but during this time he’d started on his “curiosity project” that later became Allbirds. Tim shared his many iterations on the original shoe, the Wool Runner – by the end of the presentation he’d likely shared around 15 different prototypes that he’d worked on over the years. While it wasn’t the main focus, he remained curious and continued to tweak his wool shoe.

It wasn’t until business school when an MBA professor challenged him to pressure test his idea and make a pivot, perish, or persevere decision and Tim was confronted with figuring out whether or not his curiosity project was actually a valid product idea. His professor actually called his “wool shoe” a bad idea, and pushed Tim to test it before he wasted any more of his time on it.

Category outsiders can make the most successful disruptors. In Tim’s case, he was a Graphic Designer (not industrial or fashion), and didn’t really know anything about creating shoes. Neither did his co-founder Joey. Tim was a soccer player turned MBA student with a curiosity around what needed to be true to innovate on the shoe materials and make a wool shoe. Joey is a biotech engineer. They entered into a very established category with little knowledge about it, but that is part of what enabled them to come at it with a fresh perspective. They disrupted the approach to making shoes, through the materials, the minimalist design, the positioning of the product, their business model, and more. 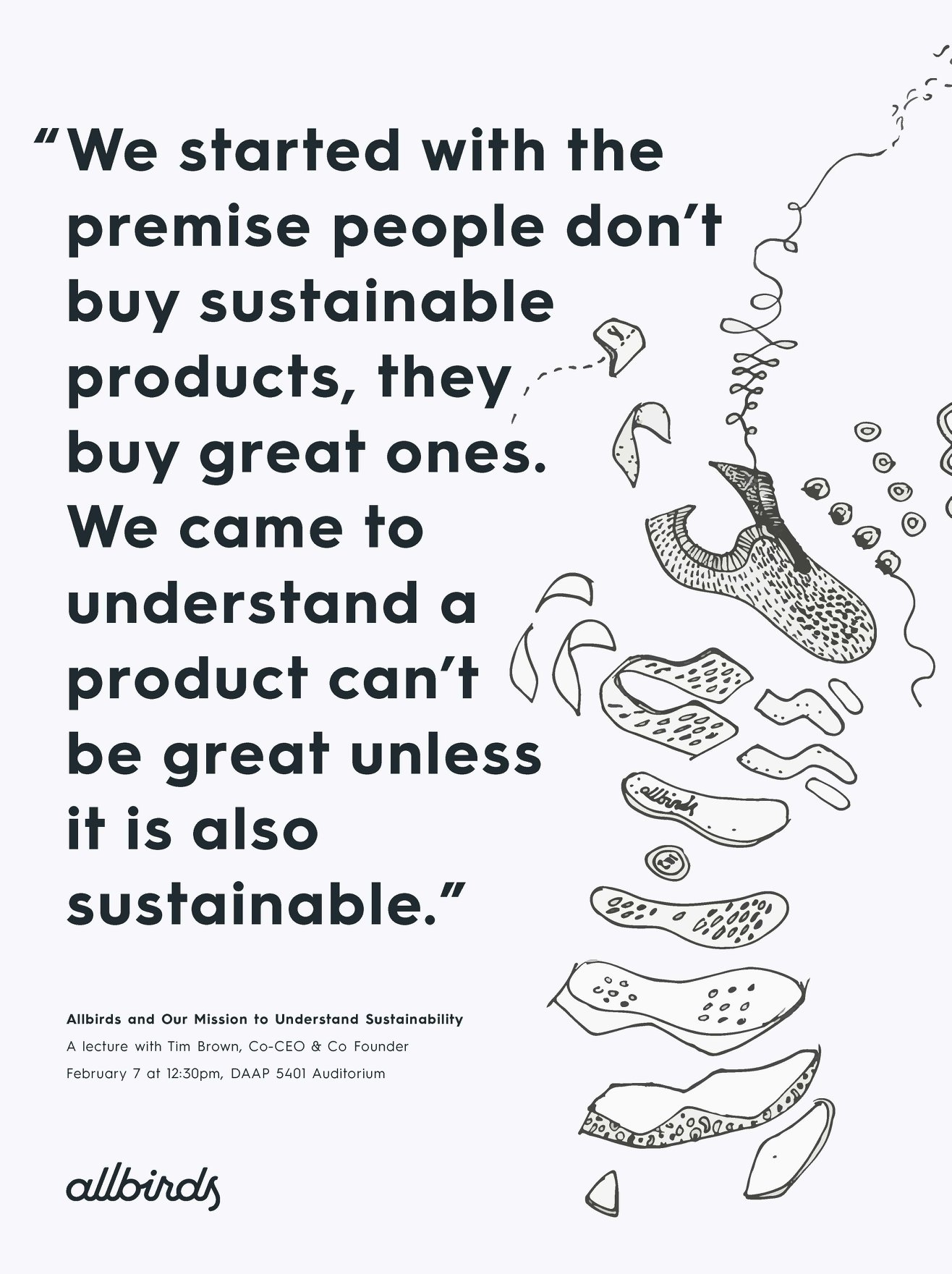 Innovation isn’t always adding more features. Allbirds has a relentless focus on improving the product. Typically when we think about innovation and improving the product, many BigCos think about what features to add and how to build upon existing. But AllBirds mission is the opposite – how can they continue to simplify and purify, staying true to the essence of the design and decrease the carbon footprint? They are innovating by making their products even more simple, more minimalist; by taking away rather than adding.

Sustainability means everything to everyone. Pick a focus, and get after it. During his presentation, he shared a graphic that showed around 10+ definitions of what sustainability means to people. They’ve identified that the biggest problem that they can try to solve in order to truly make an impact on the environment is reducing the carbon footprint. They’re operating with a relentless pursuit to improve their products and solve the problem. He shared a case story about how many customers really wanted a waterproof Wool Runner. If they weren’t operating with their mission in the forefront, they could’ve fixed this quite quickly, but drastically increased their carbon footprint of that shoe. It took time, but they searched and identified the right technology to enable a waterproof shoe that wouldn’t increase the carbon footprint.

If you’re focused on saving the world, be open-handed. Innovation is competitive. Every company wants to be the first to solve the problem. Allbirds has disrupted the shoe market, and tried to “save the world” but they’ve done so in a very open-handed way. When they invest in technology, they make it open source. One open-source investment that Tim shared was their successful effort to make shoe soles out of sugar cane instead of the existing, environmentally harmful way. When they were pitching a company, asking them to use their resources and technology to make shoe soles out of sugar cane, they included the promise that it would be open source. They did so knowing that the more that if more companies used this technology, it would become less expensive for companies and consumers. When it comes to Sustainability, and truly making an impact on the problem, they believe that all boats rise with the tides – it is the only way. They don’t think of themselves as a shoe company; they are a material innovation company. Their goal is to lead the way and innovate on the materials used in shoes and other clothing, but bring the rest of the industry along.

This was especially evident when Joey Zwillinger responded to Amazon’s copy-cat wool shoe, sharing that he’d rather they had copied the material innovation and that their shoe was equally as sustainable, versus the copying the shoe design to compete at a lower cost.

“Given what I know about manufacturing, there is no way you can sell a shoe for that low while taking care of all of the environmental and animal welfare considerations and compliance we take into account,” Zwillinger says. “Amazon is stating that it wants to be a green company. It should be taking steps to make their products more sustainable.” – Fast Company

Walk the walk. In our Expo West 2019 report, we denoted how many natural products and sustainability-focused brands were B Corps.

“Certified B Corporations are a new kind of business that balances purpose and profit. They are legally required to consider the impact of their decisions on their workers, customers, suppliers, community, and the environment. This is a community of leaders, driving a global movement of people using business as a force for good.”

Allbirds is a certified B Corp; they’re in good company with companies like Patagonia, Eileen Fisher, etc. This means that they aren’t just accountable to the investors when it comes to their bottom line, but also in relation to how they treat their workers, the environment, and more. It enables them to make decisions that traditional companies wouldn’t – investing a lot of time and money in material innovation and taking in a lower profit, but all with the mission of serving their equal stakeholders – the investors and the environment.

To learn more about Allbirds, listen to their story on NPR’s How I Built This.

See more of our thinking